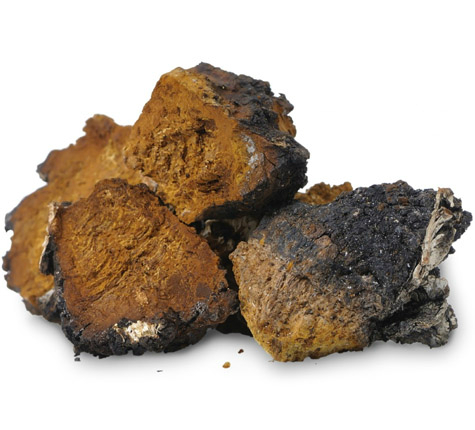 Chaga mushroom (Inonotus obliquus) contains more than 200 substances that have a nutritional and physiological effect. The super-antioxidants in chaga mushroom protect the skin and surface blood vessels from stress and also correct problems in skin pigment.

Chaga mushroom is a rot fungus (white rot) that grows on birch and other species of deciduous tree. The one year-old mother spore grows under the bark when the tree or part of it has died. Before that, blackish, gnarled deformations caused by mycelium can be seen on the tree for years.

In tests, it has been found that chaga mushroom has extremely high quantities of antioxidants. Its ORAC level of 52.452 is very high. ORAC (Oxygen Radical Absorbance Capacity) is one way of measuring the antioxidant content of foodstuffs. The ORAC level of chaga mushroom is comparable to blackcurrant, which is known in Finland for its antioxidants and has a level of 7.960. The phenol compounds in Chaga mushroom act as antioxidants, which help to strengthen the immune system and in the treatment of different infectious reactions. In addition, the high content of superoxide dismutase (SOD) in chaga mushroom helps to neutralise and remove harmful free radicals, which can be found behind many chronic infections. Chaga mushroom also increases the activity of killer cells and the production of interferons. It is also considered to be a powerful adaptogen and tonic.

In Russia and Asia, chaga mushroom is known as powerful medicine and is believed to cure many kinds of cancerous tumours. It strengthens heart function and positively affects disorders in fat metabolism. For many years, it has been used in Asian cosmetics to repair skin pigment defects and harmonise the skin.

Chaga mushroom contains more than 200 substances that have a nutritional and physiological effect. Chaga mushrooms that grow in different trees differ from each other, and usually mushroom growing in birch is used in different drugs and studies, because it contains the most effective substances. Chaga mushroom grown in birch contains, among other things, many phenols, polysaccharides, vegetable sterols, saponins, betulinic acid, betulinic derivatives, melanin pigments and B vitamins. It also contains plenty of minerals, including potassium, magnesium, manganese, chrome, iron, silicon and zinc. Chaga mushroom also contains an exceptionally large amount of superoxide dismutase, which acts as an antioxidant enzyme in the body.

Use as a medicine

Chaga mushroom’s use in medicine has hundreds if not thousands of years of history in birch regions around the world. The roots of its use as a drug extend to Siberia in Russia and to China, where it is made into a drink similar to tea or coffee and also used externally for skin complaints. The use of chaga mushroom has also spread from Siberia through the Urals and Baltic states to Finland.

In folk medicine, it has been used diversely for the treatment of stomach and bowel disorders, pain, to reduce tiredness and improve working ability, it has been inhaled as steam for respiratory infections, to balance blood sugar, as an adaptogen to support the nervous system and generally to support cancer treatments.

Chaga mushroom is also used in skin treatment, for example for small ulcers and scratches, rashes and psoriasis. These days, it has also found favour in Japan as a cosmetic to repair defects in skin pigment.

Products where chaga mushroom is used