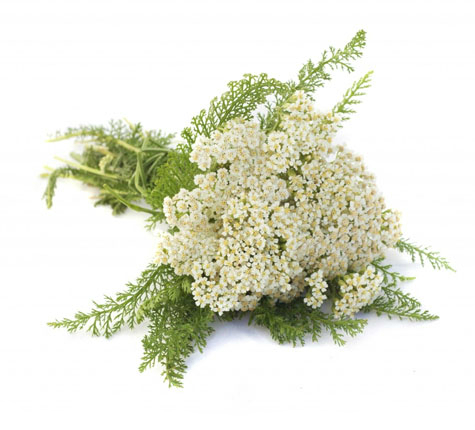 Common yarrow (Achillea millefolium) has been used for multiple purposes in primitive medicine as well as for its aromatic flavor. Externally it has been used for various skin conditions and internally for abdominal and birthing pain, infections and cramps. The flowering tops contain purifying agents and powerful astringents. The plant is rich in flavonoids, which speed

Common yarrow, a perennial plant, attracts little attention before blooming. In mid-summer, it produces a firm and angular stem up to half a meter long, where a wide and flat flower head appears, formed by tiny florets. The color of the flowers is usually white, but plants with beautiful rose-red blooms can also be found. A yarrow in bloom has a strong scent.

The finely-divided leaf of the common yarrow are an excellent seasoning, fresh or dried. For tea, blossoms and leaves are gathered in mid-summer immediately after the flowering has started.

Yarrow is common throughout Finland. It grows in meadows, along roadsides, in yards and in gardens, even in wet meadows, ditch banks and old grasslands.

Common yarrow is the Jack of all trades in traditional medication, a seasoning plant and medicinal herb in folk medicine. The blooming plant, flowers and leaves are used as medication. Common yarrow is used for external treatment of skin: boils, burns, inflammations, acne, ulcers and sores.

Tea made of dried blossoms or alcohol seasoned with them have been used for treatment of fever, pain, cold, stomach troubles and labor and menstrual pains, etc.

It is suggested that the coumarins, herniarins and umbelliferones of common yarrow in the form of water solution inhibit the growth of bacteria that cause diseases. Essential oil also has a fungistatic effect by preventing the growth of yeast fungi.

The property of common yarrow to prevent cramps is based on its flavonoid content. Flavonoids help to dilate peripheral blood vessels and they are believed to help remove blood clots. Apigenin-flavonoid is a substance that prevents inflammations, cramps and the accumulation of blood platelets.

Salicylic acid prevent inflammations similarly to azulene, which accelerates the granulation of cell tissue in healing wounds. The volatile oil, eugenol, acts as alocal anesthetic, while cineole has antiseptic properties. Cyanidine prevents inflammation and affects the vagus nerve by slowing down the heartbeat rate.

The composition of the essential oil varies greatly. Only triploid and tetraploid common yarrows contain proazulenes (camazulene), which turn into azulenes in distillation. Other components of the oil are alpha and beta-pinene, camphor, eugenol, borneol, caryophylene, terpineol and cineole.

Common yarrow oil is produced for commercial use around the world. For medication, it is used in Pharmacopeos in Austria, Czech Republic, Hungary, Poland, Switzerland and Romania.

As a plant that promotes digestion, common yarrow is especially suitable for seasoning greasy food. It is also used e.g. for improving preservation qualities of wines and as an aromatic plant in the liqueur industry.